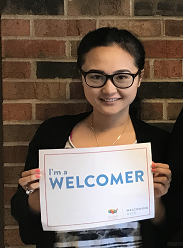 Everyone has a story. As most do, Tha Dah’s story begins with her mother who was living in Burma (also known as Myanmar). Tired of the constant attacks on her village Tha Dah’s mother was forced to relocate and eventually joined the Karen National Union (KNU). During that time she met Tha Dah’s father, a well-known KNU member who for similar reasons had also escaped his village. Tha Dah was born in the jungle near the border of Thailand and Burma.

Tha Dah’s father’s reputation with the Burmese soldiers forced them into hiding and eventually they made their way to the Tham Hin Refugee camp. Her first childhood memories are there. The conditions at these sites were rudimentary. People were provided with a small space where they have to build their own homes out of bamboo and plastic roofing. There was lack of personal space or privacy and each house was built right next to each other. “My sister could reach over with her hand and borrow supplies from our neighbor,” said Tha Dah

Education was also limited at the camp. Monthly food rations contained small portions of rice, beans, and oil but these were insufficient to meet the family’s needs. They had no official means of earning an income. “There wasn’t much to do. It was very restricted. We weren’t allowed to go outside. There was no work and we needed the money, so my father would sneak out and work illegally in Bangkok.” She was too young to comprehend everything that was going on. “People were hungry for food and for work. Outsiders came for the young girls. Often times they did not return.”

Tha Dah lived with her mother, three older sisters and her brother. “My father helped build the house before he left. After some time, the house became unstable. My brother was too young to help, so my sisters would have to go to the mountains and cut down the bamboo to repair the house.” Since her father would come home every four to five months her mother was their biggest source of income, making clothes and selling what she could.

At the camp, she completed second grade, mostly learning the Karen alphabet. The schooling depended on passing an exam. If you didn’t pass you could be 14 years old and still be in second grade. Something that is very common, according to Tha Dah.

Her father eventually hired someone to smuggle them out of the camp and bring them to Bangkok. There they applied for refugee status and after a year, they came straight to Minnesota. At that time Tha Dah was 10 years old. They struggled to adapt. “There weren’t many Karen families, at most 10 to 20. No one knew who the Karen were.” Social service providers unfamiliar with the population and often times confused the language with Korean or the name Karen. It is pronounced kah-REN.

“I struggled in school.” Her parents, a constant motivation, kindly reminded her of why she was here. They came to the US looking for a safer, better future. They encouraged her to do well in school and she forced herself out of her comfort zone and learned English.

Would you like to go back, I asked? “Yes I would,” she replied. “I have been very confused about my identity and where I belong. I still am. I never fully felt welcomed in this country.” When she first arrived her teachers were very respectful and willing to learn about her culture. The students not so much. Bullied for not speaking English, she was often pushed, shoved and made fun of. She told her teachers but to this day bullying remains an on-going issue. “Sometimes kids don’t understand. I found myself in an elevator with a girl who used to bully me. She asked why I was always so quiet, I told her because I didn’t speak English that well. She listened to my story. After that conversation she didn’t bully me as much.”

It wasn’t just the kids. She painfully recalls the time her middle school history teacher asked the class to buy materials for a school project. She was partnered with another Karen student who complained about not having enough money to buy the supplies. To which the teacher responded, “Oh you people are not poor, you receive money from the government.” She was left in awe by that statement. “I never considered myself as someone who received free money. I belonged here. But the way she said it made me feel like an outsider.”

For years she struggled making connections with Americans. She associated that teacher with everyone she encountered. It wasn’t until high school when she entered the College Possible program where it all changed. Her coach, a white Caucasian woman, changed her perceptive on Americans. “She was really supportive and truly cared about our success.” After high school she attended St. Catherine University where she graduated with a degree in Public Health. “Public health seems like a really good fit for me, I want to help my community and give back.”

During her junior year at St. Catherine University, her advisor sent her a part-time community health worker job listing at WellShare International. The moment she saw it, she knew it was exactly what she wanted to do. Although she has never smoked, she understands the struggle and remembers seeing many people, including children, chewing and smoking tobacco at the refugee camp. Currently she’s working on The Karen Tobacco-Free Program, a partnership between KOM (Karen Organization of Minnesota) and WellShare International, which educates the Karen community on the harms of tobacco use. She is also a certified Tai Ji Quan teacher and offers balance training activity for older adults.

We continued our talk about the hardship of becoming a US citizen, safety and security: The struggle of finding jobs when you don’t speak the language. Health disparities among refugees and immigrants. Why Karen and members of the other ethnic minority groups resent being called Burmese. She acknowledges that although she does not feel fully welcomed here the opportunities she’s had would be impossible in the camp. “Explore and embrace the challenges,” said Tha Dah. Through every challenge strength forms. She couldn’t be more right.

“My work here is not done. I don’t feel quite fulfilled. There’s still much more I want to do for my community.” Her incredible work is a great example of why we should welcome all refugees and immigrants to the U.S. Diana DuBois, WellShare’s executive director, mentioned that “Tha Dah is one of WellShare’s most outstanding staff members. Her genuine passion to help her community is very strong. She is a tremendous asset to the Karen refugee community in Minnesota and is a new upcoming public health star.”